The World Cup. The world’s largest celebration every four years revolving around the sport that unites the world: Soccer (as we Americans call it at least). Just as we did the March Madness ETF Issuers bracket, where we started with the top 64 ETF issuers and narrowed it down to our winner mimicking the NCAA Basketball tournament in March, we decided to do an ETF World Cup! This time instead of Issuers battling against one another, we used the country’s presence in the US ETF market and our favorite ETF from each country that made it to the knock-out rounds of the World Cup (final 16 teams).

Each round, we chose a new differentiator to choose a winner in each match up.  Here is how the bracket turned out! 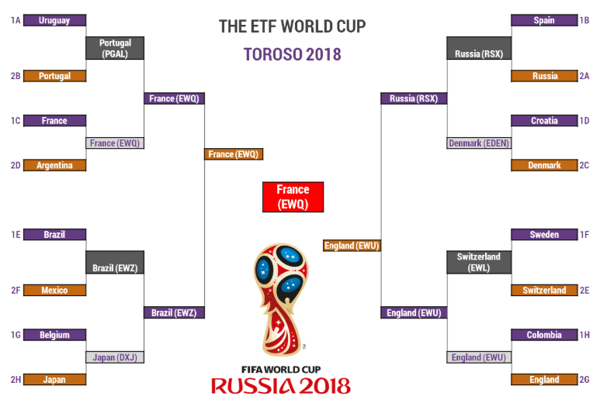 In the first round, winners were chosen on the # of ETFs they have representing them in the US ETF market.  We have some great match-ups, in the ETF realm and soccer world alike. For countries Uruguay and Croatia, it is an unfortunate ending since they don’t have any ETFs representing them. Not too many close encounters except for France vs Argentina and Colombia vs England. All four of these countries have two ETFs each, so the tiebreaker was the combined AUM for the country. Result: France and England sneak by.

In the quarter finals, the match was decided based on revenue from our favorite (often the largest) ETF from that country. France, Russia, and England advance with ease, but the Brazil vs Japan match-up was extremely close. iShares MSCI Brazil Capped ETF (EWZ) has $6.66 Billion in AUM compared to WisdomTree Japan Hedged Equity ETF (DXJ) which holds $6.23 Billion. Brazil barely sneak through to the final four!

Our final 4 include the 2018 FIFA World Cup hosts Russia (don’t worry, just a coincidence), soccer’s #2 team in the world Brazil, a talented France squad, and soccer’s birthplace England.  This round, the winners were decided on performance. Even though the World Cup is every four years, we used 5-year performance as our decider.  Even though RSX’s 3 year performance is over 6%, its 5 year value is negative. Meanwhile, England’s 5 year performance is 4.7%. In the other match-up, France’s EWQ performance stomps EWZ by over 11% difference (8.7% to -2.9%).

The ETF World Cup Final. To decide our Champion, we used a few different criteria. The first few were tied: same expense ratio (0.49), both rated an “A” grade on ETF.com’s rating, and both countries have two ETFs. The final tiebreak was from a soccer perspective.  Consequently, France get the narrow victory since the last time these two national teams matched up was last year and France narrowly won 3-2. In fairness though, England do have the better record against the French.  To settle this officially, we want to hear from our readers.  Which would you choose to invest in today? Which country should have gone farther in the bracket?

In the end, all of these ETFs and countries are vital to the ETF universe which is charted by the TETF.index. The ETF industry’s growth and progress is captured and illustrated by the index.  Maybe in four years USA will qualify for the 2022 World Cup and make its presence at the next ETF World Cup!