In last week’s post, we paid homage to St Patrick’s Day with a deep dive into Gold ETFs.  Since its still March and at the suggestion of Grant Wasylik of the Sevens Report, we decided to embrace the ETF madness with an issuer bracket.

To be fair, other ETF Nerds have built brackets in previous years of matches between specific funds.

In 2013, ETFDB.com had VNQ winning it all over SPY.  They based it on performance, which in hindsight was a mistake.

Our TETFindex is about tracking the growth of the ETF industry, so we focused our bracket on the top 64 issuers/brands and seeded them by assets.  Not surprisingly out of the 140 issuers, the top 64 represented over 99% of the total US ETF assets.  Our contest was designed to have the winner be the best representation of investable exposure to the growth of the ETF industry.  Each round focused on a unique attribute to find the top issuer.

Round 1: Investable (are they publicly traded?)
Round 2: # of Products
Round 3: Concentration of Assets
Round 4: Focus on ETF business
Round 5: Revenue
Final: TBD

Round 1: Investable (Are they Publicly Traded?)

When looking for issuers that can provide access to the growth of the ETF industry, the primary factor is if they are publicly traded.  Of the 3.5 trillion dollars in US ETF assets, over 70% of the revenue generated is connected to public companies.  Some are more complicated to trace, like DST Systems (DST) who owns the ALPs ETF company.  Unfortunately, not every first round match included a publicly traded issuer, so some coin flips allowed private powerhouses like Vanguard to advance to Round 2.

Here is the initial bracket with Round 1 completed: 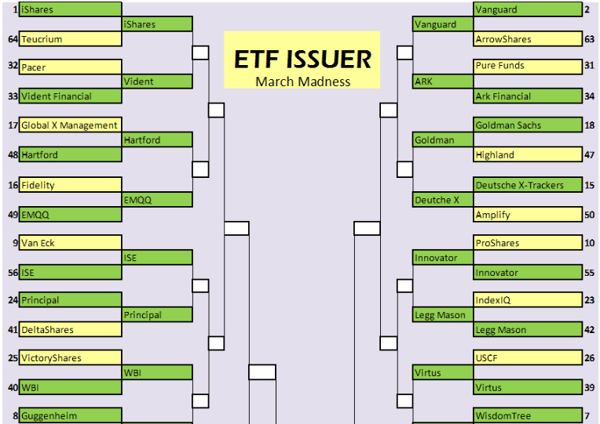 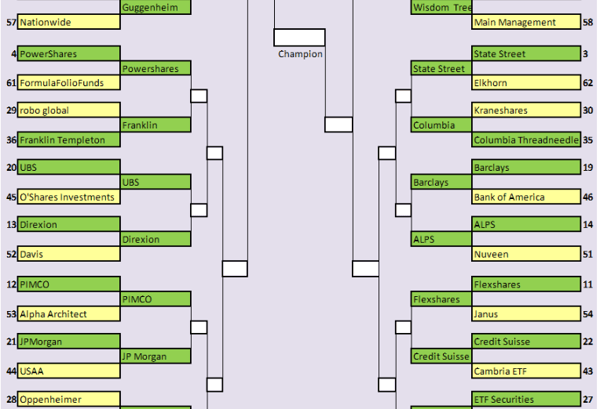 In round 2, we looked at the number of ETPs offered by each issuer.  That said, the top four seeds advanced, and there were only a few big upsets with First Trust and Van Eck falling early.  Here is your “Sweet Sixteen.” 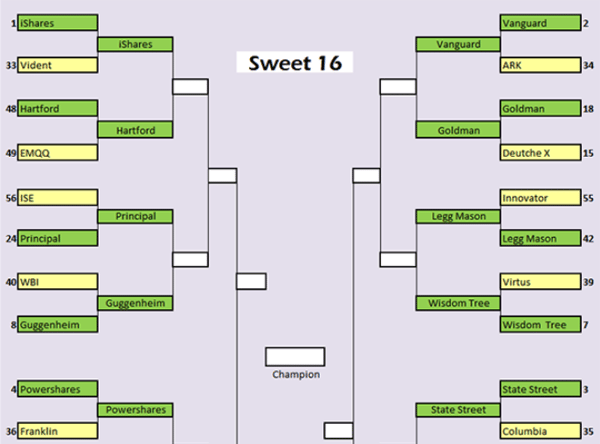 Round 3: Concentration of Assets

After round 3, we are left with the Elite Eight based on concentration of assets.  And now we had some upsets and surprises.  We used the Herfindahl index to calculate how concentrated the assets of each issuer are in just a few funds.  This form of concentration can be risk for their business as we outlined in a previous post.  For example, State street is the third largest issuer.  However, due to assets being concentrated in SPY, GLD and the Sector SPDRs, they lost to Barclays and their diverse portfolio of ETNs.  In the end, the Elite Eight features 5 of the initial top 8 issuers seeded by total assets. 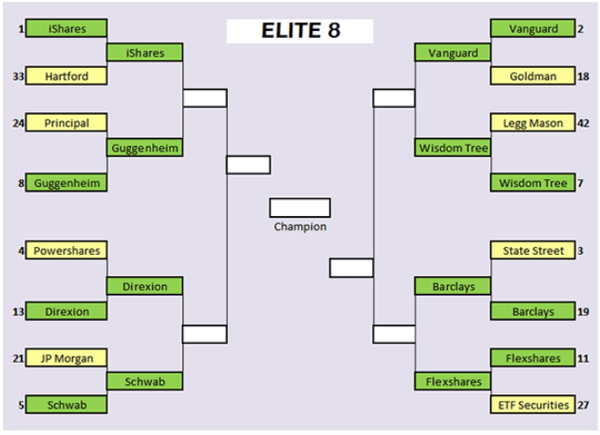 Round 4: Focus on ETF Business

After Round 4, we have our “Final Four”.  This round was about focus, essentially how much of the firm’s business is focused on ETFs.  There were two big upsets this round.  Schwab #5 and Vanguard #2 fell to underdogs Direxion and Wisdom Tree.  Also advancing are the number one seed iShares and eleven seed Flexshares. 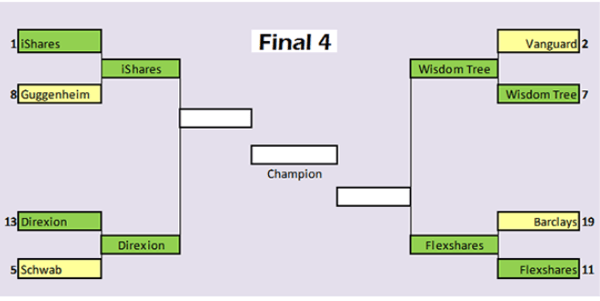 In this round, we calculated each of the four issuers weighted average expense ratios and multiplied that by their AUM: 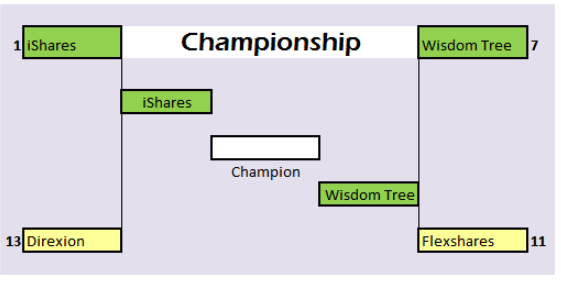 The surprise this time was Direxion again. Even though they have less AUM then Flexshares and WisdomTree, their revenue number was quite competitive.  Unfortunately, they were on the side that had them competing with iShares which captures 43% of the 7.8 Billion in revenue produced by all US ETF issuers.

Drumroll…….Our final match is: Wisdom Tree vs iShares.  Which of these two issuers best represents investable exposure to the growth of the ETF industry?  We leave it to you to decide! Within TETFindex, we give both WETF and BLK our Top Tier weight equally, so we concur both are superb issuers.

The surprise this time was Direxion again. Even though they have less AUM then Flexshares and WisdomTree, their revenue number was quite competitive.  Unfortunately, they were on the side that had them competing with iShares which captures 43% of the 7.8 Billion in revenue produced by all US ETF issuers.