The Howard Shultz Factor On The ETF Industry

Today, June 26, 2018, Howard Shultz resigned as Executive Chairman of Starbucks (SBUX). At Toroso, through ETFs, we celebrate innovative thinking, entrepreneurship, and embrace business disruption. Without getting into politics, we appreciate Mr. Shultz’s decision although it comes at an awkward time for Starbucks shareholders. Starbuck’s just announced that it would be closing 150 stores and same store sales targets are now expected to grow by only 1%.

Starbucks Shareholders may not all agree, but Howard Shultz for president is a good thing for all! Regardless of whether one agrees with his political views - having someone with his caliber will raise the bar and challenge the old guard! Shultz has confidence in Johnson as CEO and clearly sees his impact on his social mission as more important than that of extending the growth of the Company he built. His decision could not have been easy since when he left last time in 2010; the Company was in a vulnerable position as well. 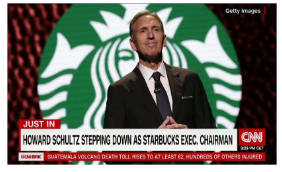 What does this have to do with ETFs?

Two hundred ETFs own about 5.47% Starbucks (SBUX) which is not meaningfully close to the average of 7.5%. Moreover, as a tribute to the house that Shultz built, we note that this stock is overweighted in 10 ETFs (range 3.75% to 2.27%). Additionally, while heavily owned by passive rules based ETF strategies, the principles that Shultz represents are reflected by the ownership by ETFs that follow factors such as Quality and Growth. Noteworthy is the fact that Starbucks ownership is also concentrated in the consumer discretionary segment and divided between U.S. large cap and International ETFs. While the recent news proved disappointing, it will be interesting to see how all these numbers change after the next rebalance. Starbucks, despite decelerating growth, both raised its dividend 20% and positioned its buyback more aggressively in tandem with the news. Objectively – we would expect less growth should change SBUX qualifications in a few of these ETFs and will test what is meant by quality in a number of these ETFs. A 20% dividend increase by a Company with a solid balance sheet whose growth is slowing may not meet every ETF’s definition of “Quality.” The great thing about a passive rules-based-structure is it follows a disciplined strategy with human subjectivity. Result: caffeine and taste do not matter!

The future direction of SBUX stock is precarious right now, but as a credit to Howard Shultz, we thought we would review how the Company is defined by its ownership by certain ETFs. As an example, the Starbuck brand is owned by ETFs that look for leading businesses whose products are defined by their reputation, ie. Vaneck Morningstar Wide Moat ETF (MOAT), Brandometry’s (BVAL) and Exponentials (ACSI). We could also highlight that millennials (MILN) love the brand and Shultz’s social mission, and this ETF therefore not coincidentally owns an overweighted position in SBUX. Make no mistake about it, Shultz’s social mission is also reflected in other social mission ETFs. SBUX is owned by the Insight Shares Patriotic Employer ETF (HONR) and many ESG and Impact investing ETFs, including the iShares MSCI KLD  Social 400 (DSI) ETF.  Mr. Shultz, as a pioneer for social change, has taught us a lot over the years including that doing the right thing can be accretive to economic value.

Most definitely, fixed income investors should be watching closely. Howard Shultz has expressed great concern about the $400 billion in interest required to maintain the country’s $21 trillion in debt as well as the fact that 45% of Americans have not saved $400 for a rainy day. To that point, we think ETF investors will be looking beyond the 60/40 type of allocation and look closely at the alternative space. A fund like Eventshares U.S. Alpha Policy ETF (PLCY) offers an opportunity to capitalize on policy change. This fund is actively managed and holds long and short positions in about 50 to 100 companies that have exposure to US government policy and regulation themes identified by the fund’s active manager.

Howard Shultz once said “The hardest thing about being a leader is demonstrating or showing vulnerability… When the leader demonstrates vulnerability and sensibility and brings people together, the team wins.” Howard Shultz and his willingness for self-sacrifice, vulnerability, and sensibilities leads by example, and at 64 years old will remain a leader to watch in the future. We hope that the shareholders of Starbucks don’t take on too much idiosyncratic risk with his departure, but if they do, our list of ETFs could be another way to buy into the Starbucks’ investment approach without as much risk. Thank you Howard Shultz – at Toroso – we will be watching, learning and cheering for your success!