At Toroso, all of our research begins by embracing the transparency of ETFs and understanding their construction.  We conduct this research using the tools and resources within our ETF Think Tank.  Every study requires a common language or nomenclature as a starting point for classification. This necessary condition is what lead us to question the term “Smart Beta” in a previous post:

Our working definition at that time was:

Smart Beta is defined as any passive ETF that is not traditional Beta.Traditional beta is any ETF that tracks an investable index solely based on market cap, geography, or sector.

As of today, we declare that the term “Smart Beta” is dead.  A term that has no definition is meaningless and only serves to confuse and obscure the true innovations of the ETF ecosystem.

How Do You Kill a Term?

Each week, to express the progress of TETF.index, Toroso shares a list of industry key performance indicators (KPIs).  We include various different growth metrics, revenue calculations and market share attribution.  One of the KPIs looks at the percentage of revenue derived from “Smart Beta”: 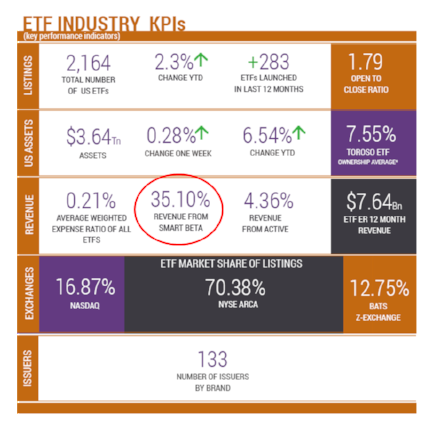 We will no longer cite “Smart Beta” revenue in KPIs and the term has been removed from the security master that powers our ETF Think Tank.  We continue to define traditional beta as any ETF that tracks an investable index solely based on market cap, geography, or sector.  All other passive ETFs will be defined as non-traditional beta with primary and secondary attributes to describe their value proposition.  We believe this nomenclature will help with ETF research and continued growth.

We covered the logic on the death of smart beta term in this podcast with Exponential ETFs around minute 40: 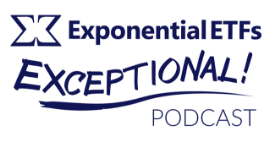 The Fruit is Rotting on the Tree

In 2015, Smart Beta was the top searched term on Investopedia, and the editor notes that the searches were driven by definitional confusion:

Smart Beta is a new, popular financial product that attempts to beat indexed funds, but many investors are still not familiar with it. The popularity of smart beta in the industry this year led it to being Investopedia’s top term of the year. Because the terms is so new and asset management firms don’t always mean the same thing when they use it

The Term is Dead, but the Growth is Accelerating

Despite the historic lack of clarity, the innovation of non-traditional ETFs is a growth factor for the ETF industry.  As defined within the ETF Think Tank security master, non-traditional beta accounts for 57% of the launches in 2018.  These non-traditional beta ETFs now represent almost 37% of the industries revenue, 27% of the assets and 58% of the list nominal products.  We believe a clearer description of the attributes of enhanced indexing and the demise of the marketing “Smart Beta” would be healthy for continued ETF growth.