How to Navigate the ETFs Rising Tides

In the month of November, US ETFs saw an additional $35.5 billion in flows bringing the total year to date $423 billion in new assets.

Blackrock/iShares has captured $197 billion or 46% of inflows and Vanguard was only slightly behind at $129 billion or 30% of all ETF inflows year to date. 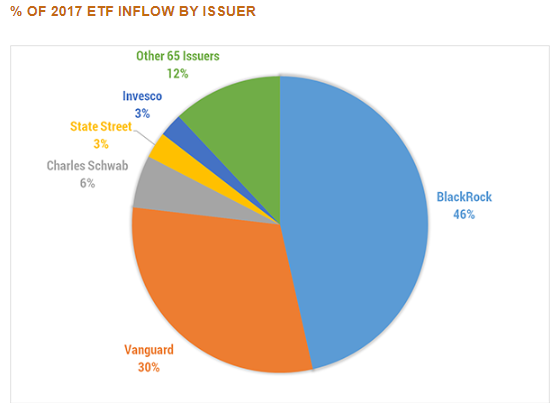 Although the two ETF giants have captured 76% of the inflows in ETF AUM, this year many other issuers have grown at even higher rates, as the table below shows: 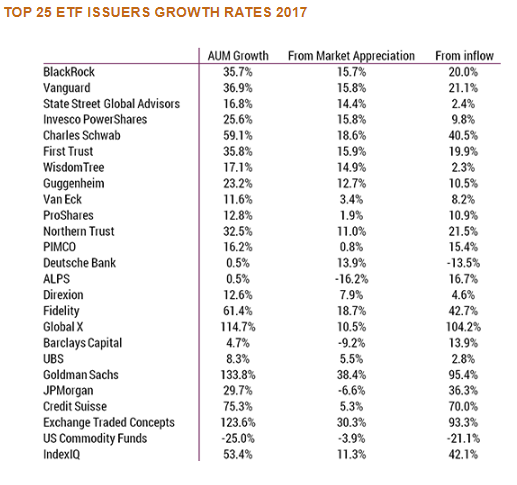 Of the 70 ETF issuers that have been in business for at least 11 months, TETFindex has direct exposure to 18 issuers and 67% of the total US issuer AUM.

As noted in the chart below, the overall average growth rate for all 70 ETF issuers exceeds BlackRock’s and Vanguard’s growth: 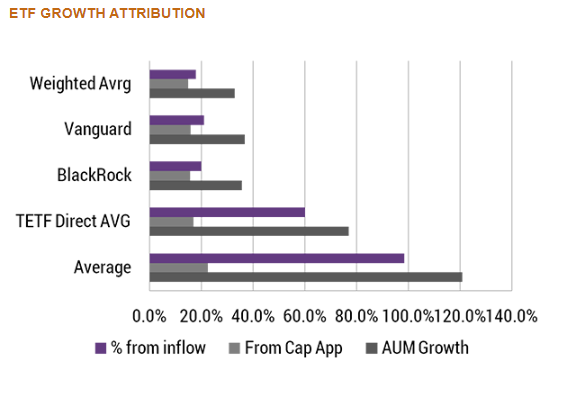 This indicates broad based growth that should scale across most issuers.  Another interesting data point is that the growth is being fueled more by inflows than capital appreciation.  This is especially surprising in light of strong performance in global equity markets.

The 18 issuers with direct exposure in TETFindex grew ETF AUM at an average rate of 77%. 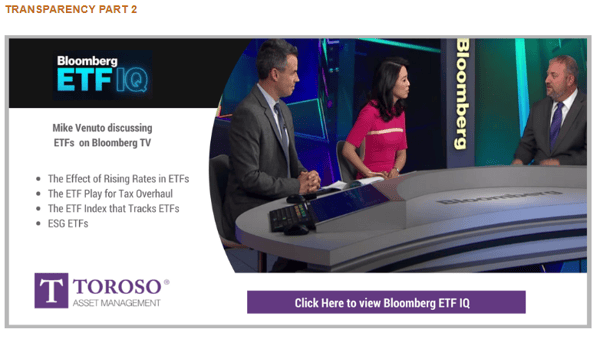 Last week we discussed ETF transparency as an ETF Client Alignment Growth Factor.  Our CIO, Michael Venuto, continued this discussion on Bloomberg’s ETFIQ program where he discussed ETF flows and ETF ownership of Sectors, specifically Real Estate. The image above contains the link to the full show on Bloomberg.

This week we look deeper at ETF transparency with a deep dive into the two issuers that have captured the most assets year to date: BlackRock and Vanguard. We began by comparing their core US ETFs.

There are some interesting similarities and some stark differences.  It appears the line ups are most similar in their attempts to offer Large and All Cap exposure. The biggest difference is the way each firm views Mid and Small Cap equities. The iShares Mid Cap (IJH) has only 5% overlap to Vanguard Mid Cap (VO).  Additionally, Vanguards Small Cap (VB) has more overlap to IJH than to iShares Small Cap (IJR).

The way these core products interact are key to ETF portfolio construction and the continued growth of the TETFindex ecosystem.

Now that we visualized the Core ETF overlaps of the two largest issuers let’s comprehend how investors are using them: 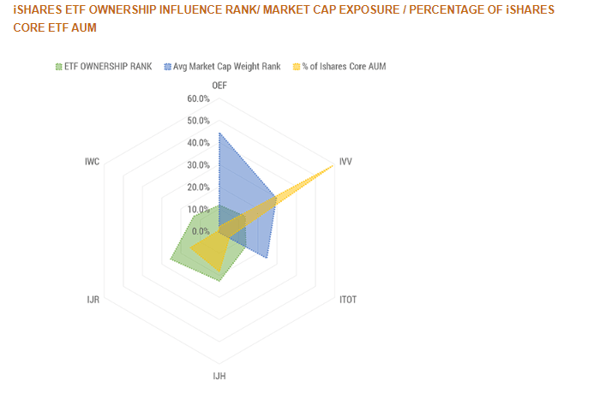 It appears that core investors prefer iShares Large Cap (IVV) but IJR has the largest influence on the price underlying equities. This, once again, debunks the myth that ETFs are responsible for the appreciation of US large caps stocks in 2017. 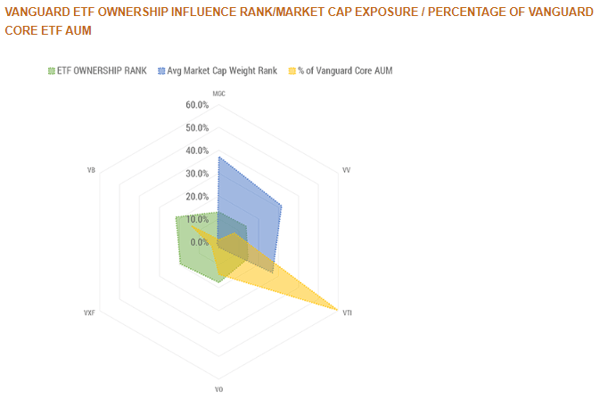 Vanguard Core investors appear to allocate toward All Cap but also have the most influence on small cap stocks.

It is important to note that Vanguard is neither public nor a TETFindex constituent.  However, about 30% of TETFindex members are deriving revenue from Vanguard’s growth, including Index providers, Exchanges, Liquidity providers and Operational Service providers.