Fixed Income was the Flow Story in August

It was clear from ETF flows that investors and or traders were concerned about a risk of recession. However, we caution that ETFs flows can reflect short-term tradability and liquidity for decision makers so they can be misleading at times. Unless you know the who and the why, you can’t always be certain about the impact and the reason. From an Ecosystem perspective, the trend towards investors embracing more fixed income ETFs makes a great deal of sense. The first Bond ETF was launched in July 26, 2002 by iShares Blackrock, roughly a decade after the first equity ETF. (A Nerd challenge: Why was LQD and TLT launched before the AGG on September 26, 2003 – Maybe Mathew Tucker at Blackrock knows?) Either way – it sure didn’t hurt the success of the iShares Core Aggregate Bond ETF, which today sports $65.5 billion in AUM.

For a larger view, please click on the image above.

With only 4 new launches occurring in August, ETF Nerds will not be surprised to read that in August, ETF closures exceeded launches and led to the total number of US ETFs declining to 2,278 from 2,288.  Sticking to the statistics, over the past 12 months, the number of ETFs is still up 7.7% and new launches are up 242 vs closures of 167, which means that the open to close ratio showed further softness at 1.45. Seasonality typically influences new launches, and already in September we have seen 4 new launches.

As of September 1, 2019, U.S. ETF assets reached also declined to $3.968 trillion, a sequential decline of 1.49% from the record month-end high of $4.028 trillion. Another KPI of significance is our metrics that measures revenues from expense ratios showed a slight decline sequentially to $7.45 billion from $7.68 billion. Non-Traditional and Active ETFs which presently closed the month at 38.98% and 5.64%, respectively helped stabilize the avg fee of .19 Bps.

It is not fresh news that the ETF evolution has been led by fund flows that track passively managed indexes, and while the industry debates on nomenclature about Smart Beta, Strategic Beta, and Free Beta, in the ETF Think Tank, we have focused on the Smart Cost ™ calculator as a way to isolate active share. Part of the future of the growth of the ETF market will be driven by how investors measure investment decisions vs. ETFs. Most seem to measure common investments vs. the S&P index or other broad index; i.e. MSCI All World, Bloomberg Barclay U.S. Agg. In reference, we think ETFs are a more accurate solution to the need for financial professionals to have an “ETF Strategy.”

The battle for market share between Blackrock, iShares, and Vanguard is why people read case studies. In 2012, Blackrock iShares needed to fight off the success of Vanguard’s Emerging Markets ETF, which was beating EEM on performance, cost, and flows. Performance came in part from the differences in the index methodology with South Korea being the largest difference. This difference continues today, but to address its issues Blackrock launched the Emerging Market Core (IEMG) ETF to compete against VWO.  Probably not coincidentally, since this launch the only thing that has been smart or strategic was for investors to swap from EEM to IEMG, or even VWO. Simply put, given an overlap of 88% between EEM and IEMG, the investor decision became clear and ever since they have been voting with their dollars.  Just in the past 5 years, EEM has seen $15.2 Billion in outflows and AUM now is at $24.6 billion, meanwhile IEMG has attracted $48.6 billion and now stands out at $54 Billion in AUM.

Given that this is a discussion about flows – we would point out that the surprise in August came with combined positive flows of $5.5 billion total, $3.27 billion in VWO and $2.8 Billion in IEMG. Poor EEM suffered $5.4 billion in outflows. We would argue that anyone paying attention the Smart Cost ™ calculator would have made the shift already.  The image illustrates our narrative.

For a larger view, please click on the image above.

Don’t Buy an ETF, But Have an ETF Strategy for Your Business

How do you measure the investment success of a venture capital allocation, hedge fund allocation, or global bond allocation? Need a benchmark index for your investment?  Within the ETF ecosystem, there are many to choose from and you might even go the route of self-indexing or possibly direct indexing in the future. These choices may be wonderful, but why not simply use an ETF which has real frictional costs and is potentially an actual competing solution to what you might own. Moreover, while broad investing may make sense from a cost standpoint, the choices still need to be analyzed, and those choices perhaps are not as tax efficient.

As many know, the ETF evolution has been led by fund flows that track passively managed indexes and while the industry debates on nomenclature (about Smart Beta, Strategic Beta and Free Beta) in the ETF Think Tank we have focused on Smart Cost ™ because it isolate the cost of active share. Part of the future of the growth of the ETF market will be driven by how investors measure investment decisions vs. ETFs. Most seem to measure common investments versus the S&P index or other broad index; i.e. MSCI All World, Bloomberg Barclays US AGG. In reference, to the need for financial professionals to have an ETF Strategy we think ETFs are a more accurate solution to the question. Most importantly, in spending the time analyzing the true competing alternatives you might find that growth as a factor might have been a better place to be in the emerging markets than in the use of passive indexes that may have a legacy tilt towards large cap state owned enterprises..

The average weighted expense ratio for U.S. ETF remains the same at 0.19% from July, 31st. Fee compression may be a slow continuum, but with increased assets, the projected 12-month revenue increased from $6.83 billion in January to $7.45 billion today.

The revenue also continues to diversify away from low cost, traditional beta and toward nontraditional passive “smart beta” ETFs and active ETFs.

The percentage of ETF revenue from nontraditional passive ETFs in January was 36.38%; today it’s 38.98%. Active ETF revenue also gained market share, growing from 5.11% to 5.64%. These KPIs help show that investors are still looking for interesting and creative strategies to help diversify their portfolio.

There has been very little material movement Exchange market share of ETF listings in 2019, with NYSE remaining in the dominant position at 69.71%. Cboe Global Markets has 14.20% Nasdaq stayed remained at 16.26%. 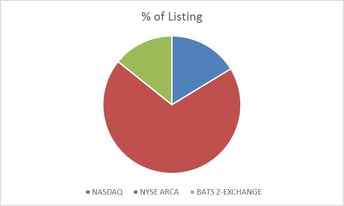 The number of branded issuers consolidated to 140. The ETF sponsor business is a matter of scale, persistence, and reach – Not just of good ideas. In 2019, we have seen a number of players in the ETF market consolidate – Victory Shares and USAA are the most obvious this year. Tracking who the new players are, those who come and go, and some who come back is a challenge due to a lack of common definition and the nature of how the ETF Ecosystems collaborate. We expect this number to be fluid and look forward to Exchange Traded Fund Entrepreneurs (ETFe) continue to innovate and pursue the dream of providing investors with innovative solutions.   Since the beginning of the year, new issuers have increased from 133 to 140 which is a 5% increase. A reshuffling and or consolidation of platforms led to last months number of 144 to decline.