Does Bitcoin Need an ETF?

The ETF Think Tank is dedicated to furthering education regarding investing and the benefits of the ETF structure. To that end, it is impossible to ignore the excitement around Bitcoin and a potential Bitcoin ETF listed in the United States. This is not a new subject for us; back in early 2017, we covered the multiple pending filings with the regulators:

Combining ETFs and Bitcoin is likely to be consequential. After all, ETFs have been revolutionizing investments for 25 years, and Bitcoin, since its 2009 introduction, has shown potential to completely change financial transactions. In an age where asset allocation is its own asset class, a Bitcoin ETF could have a place in many portfolios.

None of those filings were approved. Five years later, we are seeing a new crop of proposals seeking to provide direct exposure to Bitcoin in the ETF structure.

In addition to a meteoric rise in price for Bitcoin, a lot has changed in the finance system infrastructure during these five years. Traditional custodians like Fidelity, Bank of New York and Gemini have stepped in. Monitoring and AML processes are being built and deployed by banks and exchanges. Multiple ETFs and ETPs have been launched in Canada and Europe. The leadership of the regulators has changed with the administration turnover. Is this enough for a US Bitcoin to be approved? Only time will tell, but with five active filings already in place, the clock is ticking. 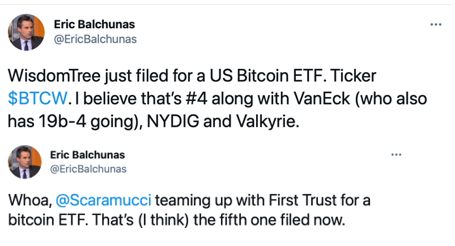 Currently, the primary way that investors gain exposure to Bitcoin in a traditional brokerage account is through Grayscale Bitcoin Trust (GBTC). This fund is NOT AN ETF. Because the fund trades at a premium, or discount to the underlying NAV or value of Bitcoin held in the trust, many people call it a Closed End Fund (CEF). GBTC is NOT A CEF. The fund is created as an emerging growth trust and not held to the standards of 40 Act law. We explained this structure back in 2017:

Grayscale used the JOBS Act to create a limited partnership (LP) that owns Bitcoins. After 13 months, they listed the LP on the over-the-counter (OTC) market. So if you wanted to, you could trade the Grayscale Bitcoin product today. They charge a hefty 2% expense ratio for facilitating investable access to Bitcoin.

But crucially, the Grayscale Bitcoin Trust, which trades on the OTC market under the symbol “GBTC,” doesn’t have the ability to create or redeem shares in the open market, which can significantly crimp liquidity. GBTC trades like a closed-end fund—often at a price that can be substantially different than the value of the underlying asset.

Grayscale has potentially addressed this issue by filing to create an exchange-listed ETF version of this existing idea, which will include the creation and redemption mechanism so crucial to the success of ETFs. This idea of taking a closed-end product and potentially converting it to an ETF structure could have massive impacts on the ETF industry if the SEC approves.

Recently, a job posting from Grayscale to hire seven positions with ETF experience suggested that they may revisit converting GBTC to an ETF. However, as Dave Nadig pointed out in his deep dive on GBTC, there is very little incentive for them to convert permanent capital into a redeemable fund.

“By waiting, we also have magnified the first-approved advantage in the Bitcoin ETP or registered fund space. Moreover, because we have comported ourselves like merit regulators, investors might view any approvals as an official blessing by the Commission about the quality of the products we approve. That would be the wrong inference to draw; investors, alone or with the help of an investment professional, need to think carefully about whether any particular security—crypto-based or not—is right for them.”

Her speech Paper, Plastic, Peer-to-Peer is a must read.

An ETF would just be an on-ramp to access Bitcoin. Ironically, the original thesis of Bitcoin was intended to replace the need for a “trusted third party”, which is the role an ETF would play for investors. The regulators, as noted by Peirce, don’t want to convey approval as endorsement by a trusted third party. Traditional investors want an ETF so they can speculate on the price of Bitcoin. Matt Hougan from Bitwise has noted additional issues that a Bitcoin ETF solves, like lost keys, for-fee crypto advice and further blockchain adoption. It may sound contradictory, but a Bitcoin ETF is the Pandora’s box that we all seem to want opened, including the team at ETF Think Tank. Three years ago, Mike Venuto was laughed out of an interview for claiming that blockchain traded funds were the future threat to the growth of the ETF industry. Today, we are on the cusp of an ETF giving credibility to the technology that may one day replace the ETF structure. Bitcoin does not need an ETF, but ETF issuers and investors want a Bitcoin ETF. The further adoption of truly decentralized finance and blockchain will result in the demise or transformation of traditional finance.