Apple Should Take a Bite Out of Bitcoin 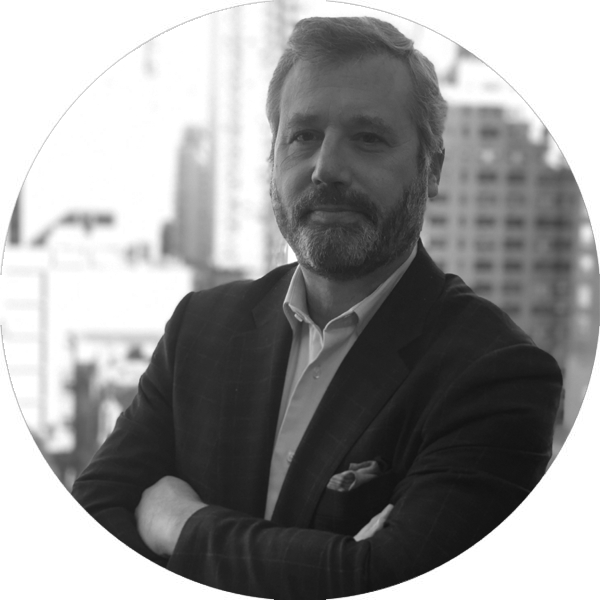 The Management at Apple needs to look closely at Bitcoin:

Apple’s ability to manage its balance sheet with a “weighted–average cost of debt near zero” and its inability to make a sizable acquisition should make it a motivated buyer of bitcoin. Apple is not a bank that needs a AAA credit rating. Capturing the next disruptive technology wave is what it needs to focus on more than anything. Growth is why most people buy technology companies, and such an investment would diversify its balance sheet while also remaining liquid. Outlining part of the financial issue are sections of the 10K listed below as “Opportunity Section (10K).” Apple’s weighted interest income is declining like everyone else’s – 1.85% for the 12-month period, down from 2.19%, and down 56% from a year ago. The traditional fiduciary may argue that returning another $500 billion to shareholders in the form of dividends and buyback is responsible and prudent management of excess cashflow, but I would argue that Apple should speculate a little, and quietly try to own 5-10% of the outstanding Bitcoin at about $20 billion. As a shareholder, I admit this view is self-serving and non-traditional. I just don’t see how owning a larger portion of Apple through the buyback program doesn’t have a gravity problem in the laws of large numbers. Cash is trash. I want innovation and growth!

Robert Schiffman, who writes for Bloomberg Intelligence about credit, highlights the strength of Apple’s balance sheet in his article titled “Liquidity: Apple Debt and Leases of $122 Billion Tower Over Tech Peers” makes me wonder about adjusted total debt levels at Apple, which now top $120 billion following a Q4 return of $22 billion in cash ($18.5b in buy-back + $3.5B in dividends). Sure, they have made progress in spending the Shareholders 2017 peak cash balance of $285 billion, but the question remains: what to do with a free cash flow machine? The cash balance at $192 billion is a significant war chest, a cash HODL and or a nice place to “park” some bonds. What’s a creative Treasurer like Luca Maestri supposed to do? Remember – from 2012 thru 2016, the enterprise value of Apple was stuck between $300 billion and $600 billion and the stock was around $15-$25; all this made the free cash yield very compelling. This is not the case today, and Apple’s success has led to a 5x-8x move in the stock price. Hooray for US!!!! 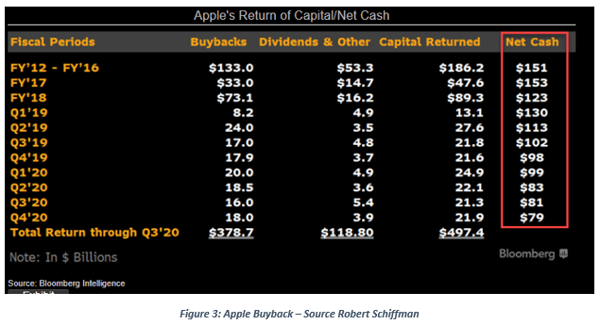 The Opportunity (Highlights from 10K)

All this leads to the what if question: Would it be prudent for Apple to spend, “speculate,” or invest $10 to $20 billion on Bitcoin as a disruptive technology? Call it a 1-year technology spend. Crazy as this sounds, with the firm’s technology and engineering foundation, their focus on app technology and their genuine dominate ecosystem, why would this not be a self-fulfilling proper capital allocation? The Company is worth $2 trillion, and spending another $56 billion of shares on its own stock at 25-30 times earnings is marginal at best (see figure 5). It is reasonable to postulate that Bitcoin, and ultimately digital assets in general, are embraced by some of Apple’s long-term individual shareholders, but not all. However, equally as important is the belief that Bitcoin, and ultimately digital assets in general, are embraced by some of Apple’s long-term individual shareholders, but not all. The developer platform and much of its ecosystem believes in blockchain as a digital technology and many of these people are probably stockholders. In fact, it is fair to assume that management at Apple has already embraced blockchain so in capitalizing, on Bitcoin, it would only be accelerating what it already knows is a disruptive technology, and arguably aligning with what it sees as a technological future. How often will Apple have the opportunity to make an investment that is a transformation to its ecosystem as an open-source technology and benefit by its own network effect while maintaining the same liquidity on its balance sheet. Of course, value investors and traditional institutional investors may cringe at this action, which is why the buyback to infinite may remain in place. Three last points: (1) a buyback that buys low is more effective than one that buys high; (2) traditional value-based holders must be twisting right now to justify buying back shares at the current multiple versus the potential downside; (3) Apple could simply consider this action part of its R&D budget, and write off the spending or manage the mark to market the same way that MicroStrategy (MSTR) has done – meaning at cost or lower to the market. Link to transcript. Research each year is effectively written off that way. 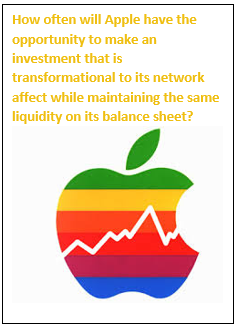 Robert Schiffman writes that Apple’s after-tax weighted average cost of debt is a meager 10 Bps, with no real maturities coming due until 2025. Remember, Apple principally runs a relatively asset-light business. According to Schiffman, the company has about a decade of runway on their bond maturities, equaling about $76 billion. Listen to Bloomberg radio. I get that certain institutional shareholders might get twisted up by the purchase of Bitcoin, but we need to work through the math and the opportunity versus the stock buyback. I like what Mr. Schiffman has to say about Apple’s cost of capital and credit, but whether you see Bitcoin as a hedge against inflation, a speculation or an alternative asset class, it is a technologic innovation that Apple is in a unique position to access and provide to its shareholders. I am not an analyst on Apple stock. However, if the forecast by analysts on Bloomberg proves correct and free cash flow of over $150 billion through September 30, 2022 is achieved, the question about Bitcoin for Luca Maestri and Tim Cook must be contemplated. 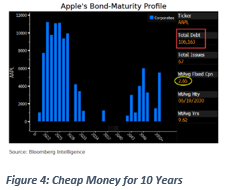 Apple may already be on the verge of contemplating such action. Make no mistake about it. The Company is intimately involved in the technology and had better play a foundational role in its evolution over the next decade.

Steve Job’s Vision for Apple is Aligned with Bitcoin

A couple other points to make about Apple. Steve Jobs was a great marketer, and this reminds me that the culture of Apple and Bitcoin is symbiotic. Do these statements ring a bell? See article by Camila Villafane: “Steve Jobs Marketing Lesson: 10 Timeless lessons he’s taught us and his most famous marketing quotes.” Here are a couple of highlights about specific lessons from Jobs.

Alibaba (BABA) may be the most aggressive patent filer in 2020, but taking a direct leap at buying Bitcoin could show leadership in the area while also directly capturing a compounding-network effect. Tim Cook is known for saying that he sometimes would rather be the “Best than the first. It is nearly impossible for a company to be the best, the first, and to make the most of a given product.” In other words, by taking a similar leap into digital assets and blockchain, Apple could play catch up both financially and by showing leadership in the ecosystem. Blockchain, crypto and bitcoin are all intertwined, and Apple needs to take a stand in this area. A direct investment in digital assets aligns both with their corporate culture, their platform ecosystem and their research budget. 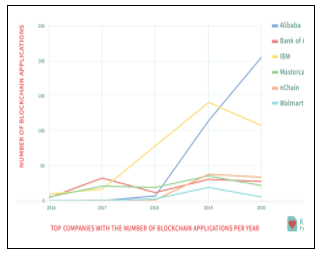 This week in the Get Think Tanked Happy Hour Show, we have Nancy Davis, who manages the Quadratic Interest Rate Volatility and Inflation Hedge ETF (IVOL). Watch interview here. Similar to Michael Saylor, Nancy Davis is concerned about interest rates, inflation and the value of her cash. Given the great news from Pfizer this past Monday, we see this discussion as especially timely because markets are dynamic and all intertwined. The gap between 2 and 10-year yields surges to the widest since 2018. How’s that bond portfolio doing? Wait - is it down? Sign up here.

Apple is a technology company whose foundational strengths are its ecosystem, product development and balance sheet. Apple is not a bank, and its growth rate is not evident in the operating number. Most importantly, traditional value-based metrics cannot justify another $500 billion buyback program. Additionally, since the Company cannot make a significant acquisition to accelerate growth in a meaningful way, why not use the strength of the balance sheet to take a leap into the world of digital assets? To be clear – I do not expect Apple to stop its buyback program. It has sufficient liquidity to do both, and while even if it had to write down a $20 billion investment in Bitcoin, such a loss is within the scope of their research spending and not much riskier than spending another $56 billion in hopes of knowing the value and price earnings multiple of Apple stock in the future.